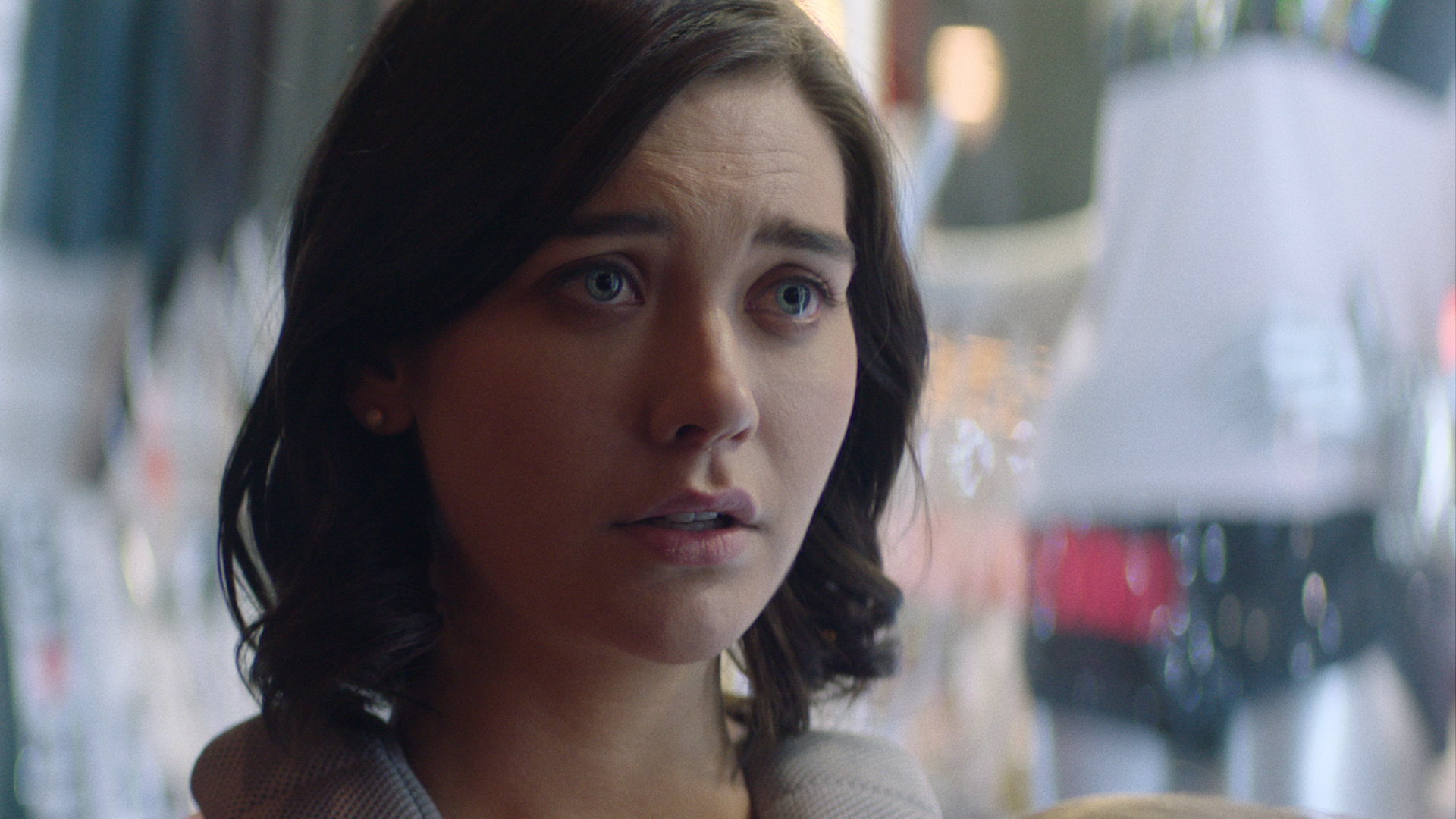 You are starring as Vivian in the new series Paradise City! Talk to us a bit about that opportunity and how you first became involved in the series.

– I am! A few years ago, I was actually offered the role right away. I was honestly in shock since I had been struggling with auditions and finding my next role. I was familiar with the movie that was made before,“American Satan”, and I was so excited to join this project. When I accepted the offer, I had no idea who else would be a part of the cast, or how big it would end up being! I loved the script, the concept, and my character. This would be my first time getting the opportunity to act in something edgy and I was very excited for that!

How was experience shooting on set with the Paradise City and the rest of the cast?

– The Paradise City cast and crew was definitely the best I’ve worked with. Everyone on set was so experienced and usually that would scare me since I have only acted a few times, but this cast made me feel so comfortable and confident! The energy on set was very chill and fun, all while working super hard. The people I worked with the most on set like the director Ash Avildsen, Fairuza Balk, and Mark Boone Junior made my experience incredible. I was working alongside LEGENDS and they not only supported me in feeling confident in my performances, but also treated me like an equal. That is really special. They have been doing this for years and they truly made me feel like I deserved to be there with them. I can’t be more appreciative of them.

What can you tell us about your role as Vivian in Paradise City? What can viewers expect from the series?

– Vivian is a really great character in this series. Her role brings an aspect of innocence to this sort of dark story. Vivian’s storyline is something that some viewers would enjoy imagining themselves in. She is in a very tough situation and it’s entertaining to watch how she moves and what decisions she makes. The viewers will have themselves thinking things like “If I were her, I would handle this so different!” or “honestly, she is handling it well, that’s how I feel.” Some people might be rooting for her, and some people might be overwhelmed with the chaos she brings.

You have starred in the first season of AwesomenessTV’s series GUIDANCE as the lead role of Miriam, and you also recently appeared in a recurring role in FREAKISH for Hulu. What were some of your favourite moments from these incredible experiences?

– Guidance was my first time acting and it was seriously a dream. Not only did I get casted without any prior experience, but I got to play a dream role for that time in my life. I was 15 years old playing the popular high school girl involved with a sex scandal. And, she wasn’t just the stereotypical high school mean girl… It was truly a surreal experience I will remember for the rest of my life. I am so grateful for having that opportunity. The director, Anna Mastro, worked closely with me and helped me so much. She was wonderful. As for Freakish, it was so much fun working with the cast. They were all peers and some people I had known before! That is a unique experience that made it fun and natural. I also have always loved zombie shows, so it was so exciting for me to be playing a role in that world. There were a lot of action scenes which was a first experience for me.

You made your debut on YouTube at just ten years old. What made you decide to start a YouTube channel at such a young age and how has your content on YouTube evolved over the years?

– I started my YouTube channel out of true passion! I’ve wanted to be a fashion designer since I was a kid, so around the age of 10, I hopped on YouTube and typed in “How To Sew”. From there, I ended up finding all types of fashion videos and then makeup tutorials. After being obsessed with watching other people’s videos, I just decided I wanted to make my own channel. The way my content has evolved over the years is pretty crazy. I have been pretty consistently sharing my life and style online from the ages of 10-21. During those ages, you are really growing up, finding yourself, and learning from mistakes. My content has always really mirrored where I was in my own personal kid to teen to adult life, so that’s the biggest way it’s evolved. My videos at age 10 are different at age 16 or 21 because I am all different versions of myself, but at the end of the day, my content is always about beauty and fashion and my journey.

How does one transition from YouTube into the big screen? Was it a natural evolution for you and your career?

– I was incredibly lucky to have a smooth transition into acting. Working with AwesomenessTV made it natural. These days, we look back on people like me who started in entertainment so young as basically child stars. I have been in front of the camera and on set for so many years that transitioning into film was pretty comfortable for me. Although, knowing how to be in front of the camera doesn’t mean you’re experienced in all the behind the scenes work for film. There is so much work that goes into even getting casted for a role, so that was something I was not used to. There was and still is a kind of stigma around YouTubers or “influencers” in mainstream media, so that was a difficult thing to navigate. I wasn’t always accepted and sometimes looked down on.

You’re also a model and have been featured by Teen Vogue, V Magazine, CR Magazine and many more. How does your experience modelling compare with your experience acting on screen?

– These worlds are very different! There are different expectations from these different jobs. Modeling was fun because I loved fashion and beauty and creating art, but it is majorly based off of our outside appearance. Acting on the other hand, is mostly based on talent. Being an actress, you focus more on how you feel, how you express, how your mind works and how you use it. I love them both and they both fulfill different things for me.

In addition to everything else, you also launched your first fashion line, Steele, at the age of 19. Talk to us a bit about the fashion line and how it came about.

– Like I said, I have always wanted to be a fashion designer. For as long as I can remember, I was sketching clothing designs. Starting STEELE was always a dream goal of mine. I told my manager at 13 that I wanted a clothing line. Years went by as we were waiting for an opportunity for this to happen. I had a bunch of friends who were in school for fashion design or had brands of their own, so I thought it was time for me to take matters into my own hands. If they could do it, I could make it happen too! So I first put together reference photos and notes for every single piece I wanted to make for a first collection. I then hired a friend of mine to turn these designs into digital sketches and made a finished tech pack. With that preparation, I could take this deck to a manufacturer and be able to get things produced. While I was working on this, my manager found a manufacturing company and set a meeting. I brought them my tech pack with a full first collection and they were on board! That’s how STEELE started.

Simultaneously working in so many areas of the entertainment industry, how do you manage to organize your time and fit everything into your schedule?

– This is definitely a hard one. I sometimes get overwhelmed because I want to be my best in all these areas, but it is incredibly difficult when you’re spread so thin. I think I’m able to balance it now by separating what is work, what is passion, and what is fun. Sometimes I have to do some work that I don’t necessarily enjoy in order to get to do the things I dream of. My job is non-traditional, so I accept that there are things I have to do that other traditional entertainers don’t. I am so lucky to be in the place I am, to have the job and opportunities I have, so I will work however hard I need to get to my goals.

Is it always amazing or are there any pet peeves associated with your work in the industry and in particular being a public figure?

– It is definitely not always amazing LOL. I think the biggest one for me is the stigma attached to people like me. Being a YouTuber or influencer is very often looked down on. Coming from the background I have, it’s like you’re constantly trying to prove yourself and your worth. When I first started modeling, I had the best agency in the world. This was around the time the modeling world was obsessed with the kids of celebrities and they got booked and supported incredibly. I thought to myself- okay if I got the privilege to be signed to such a huge agency and someone’s daughter had the same privilege from their parents being famous, shouldn’t I get the same kind of support and treatment? That was not the case and it was extremely frustrating. I could be just as good at my job, even better, but I would always be seen as less because of the stigma mainstream media had against YouTubers.

What are your plans for the future? Working on anything exciting at the moment that you’d like to share with us?

– I plan on continuing to do what I’m doing but bigger! More opportunity and more experiences while breaking down the wall between social and mainstream media. I want to continue growing STEELE into the huge brand I’ve always wanted. I’m working towards a future where I can be established and respected as a business woman, fashion designer, and actress. I just want to live out my dreams.

Ambitious New Platform: ‘Independent’ Is Here To Allow Fans To Directly Invest In Their Favorite Artist’s

COTTA Is Back With Intimate Debut EP ‘baby steps’

Shaeden Madi Returns With Infectious New Single, “Ima Get Mine”